You are logged in as a CMS user. Return to Site Manager X

This collection brings to life the teeming streets of Victorian London, inviting students and scholars to explore the gin palaces, brothels and East End slums of the nineteenth century’s greatest city. London Low Life is a full-text searchable resource, containing rare books, ephemera, maps and other materials relating to nineteenth and early twentieth-century London. It is designed for both teaching and study, from undergraduate to research students and beyond.

From salacious ‘swell’s guides’ to scandalous broadsides and subversive posters, the material sold and exchanged on London’s bustling thoroughfares offers an insight into the dark underworld of the nineteenth century city. Children’s chapbooks, street cries, slang dictionaries and ballads were all part of a vibrant culture of street literature.

London Low Life is also a highly visual resource for students and scholars of London, featuring maps, cartoons, song sheets, street cries and a full set of the essential John Tallis’s Street Views of London - a unique resource for the study of London architecture and commerce.

We also include the celebrated Gissing ‘Scrapbook’ from the renowned Pforzheimer Collection, which includes clippings, ephemera and notes from the author of London novels New Grub Street and The Nether World.

This collection will be of interest to nineteenth century scholars researching: working-class culture, street literature, popular music, urban topography, ‘slumming’, prostitution, the Contagious Diseases Act, the Temperance Movement, social reform, Toynbee Hall, police and criminality. It will also be of interest to students and scholars from a wide range of disciplines, including literature, cultural studies, urban studies, social history and the study of leisure and tourism.

The material found in this resource is drawn from the holdings of the Lilly Library, the rare books, manuscripts, and special collections library of the Indiana University Libraries, Bloomington.

Material found in this resource includes: 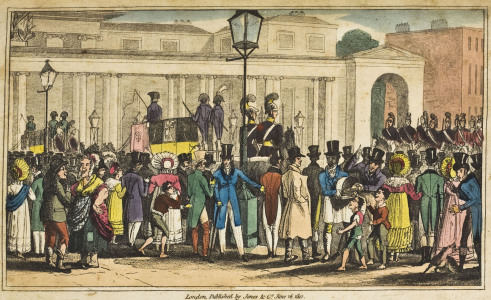 There is a strong emphasis on rare or unique material, particularly in the range of ephemera and street literature available. There is also an emphasis on visual material.

We include material from the following collections from the Lilly’s rich resources:

An essential collection of ‘fast literature’ and street ephemera, including broadsides, cartoons, playbills, advertising, ballads and penny fiction. The collection is concerned with the darker side of London life – the gambling dens, criminal refuges, brothels, music halls, and slums. It was formed by Michael Sadleir, in part as research for his 1940 novel about a London prostitute, Fanny by Gaslight.

The street cries are drawn from the renowned Virginia Warren Collection of Old London Street Cries. We include all London street cries from the eighteenth and nineteenth century from this important collection. Street cries were the lyrical calls of vendors and merchants, hawking their wares on the streets or in markets. Recorded along with pictorial representations of the sellers, these became a popular subject for books in the period. For a detailed analysis of street cries and their historical importance, see our specially-commissioned essay by Sean Shesgreen, author of Images of the Outcast: The Urban Poor in the Cries of London (Rutgers University Press, 2002).

Chapbooks were cheaply-produced, pocket-sized booklets, produced from the sixteenth century through to the second half of the nineteenth century. London was the chief centre of production for these booklets, although they were also produced in the provinces and in the USA as well. They are characteristically eight or 24 pages in length, and often feature crude coloured woodcuts as illustrations (not always related to the text). Chapbooks give us a remarkable insight into the literature sold and read on the streets of the London. The content of these booklets varied enormously, although nursery rhymes and folk tales are by far the most popular subject. The c.200 chapbooks in this collection were all printed in London in the nineteenth century.

We include a complete run of the rare Tallis’ Street Views, a series of beautifully engraved directories depicting London street by street in wonderful detail, along with details of the businesses contained within each locale. These views provide us with invaluable insight into both the architecture and the usage of London’s buildings in the mid-nineteenth century. We also include over 100 maps of Victorian London - some of which are very rare - enabling fascinating comparisons of the city during a period of massive change. Specialist maps show information such as electric lighting districts, sanitary inspectors’ districts, and new railway developments.

Swells guides and fast guides to the city, designed for the man-about-town, complement the collections of ephemera and street literature. We also include many rare guidebooks and histories of London, designed for more respectable tourists of the city. These cover theatre, sightseeing, restaurants, and practicalities, and offer a fascinating insight into both the life of the city and its representation to visitors of the period. Many of the guidebooks were aimed at visitors of landmark events, such as the Crystal Palace or the 1862 exhibition. There are also books written by reformers, reflecting the Victorian middle classes’ altruistic interest in the ‘low life’ alongside the other, more prurient fascinations displayed elsewhere.

The celebrated Gissing ‘Scrapbook’ from the renowned Pforzheimer Collection has been described by Dr. David Grylls as “an evidential goldmine…the single most important manuscript source that might be made available to Gissing scholars”. Clippings, ephemera and notes for works from the author of London novels New Grub Street and The Nether World are divided thematically into headings such as ‘low characters’, ‘gambling’, ‘London vulgarisms and superstitions’ and ‘private life of working classes’.

We include over a hundred maps, ranging from the early eighteenth century to the 1920s, which reveal the city’s startling growth in geographical terms. Maps chart changes in the cityscape, including the addition of railways, the London Underground, canals, postal divisions, the docklands, school boards and other “metropolitan improvements”.

In addition to the rich selection of primary sources, London Low Life contains a wealth of secondary resources, including a chronology, interactive map, essays by leading scholars, visual galleries and exhibitions.

All editorial decisions relating to this project have been made with great care, consideration, the utmost sensitivity, and input from the Editorial Board.

Every care and attention has been paid to preserve the historic authenticity of these documents which range in date from the mid-seventeenth century to the beginning of the twentieth century. Some digitised primary sources do contain offensive and othering language and ideas towards specific social groups. This language has been preserved for historic authenticity in primary source documents, and in metadata in cases where this makes the material discoverable for research and learning purposes.

This is from the quartex-front-end repo.